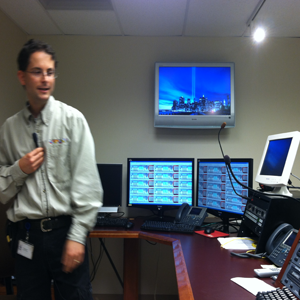 This blog is the second in a three part series. To read the first blog click here >>>

As part of our AV Week Activities, a week designated to celebrate, promote and share AV throughout our community, I was able to tour the LDS Conference Center with almost 40 Listen Technologies employees and friends. The Conference Center has the ability to interpret and disburse 97 languages live.

Not even the United Nations comes close to that number (they interpret 6 languages live). I was impressed by many things during the tour, but I think that the language interpretation process is especially impressive as it really is uncharted territory.

On the 2nd floor between the main auditorium floor and balcony, is the language interpretation area. There are 58 individual language booths, a general meeting area, a control room and one set of bathrooms. ASL translation is performed in a different area as it requires its own studio and production staff. During LDS General Conference, which is two full days of content streamed live twice a year, they will simultaneously translate up to 97 languages. Each language team has from 6 to 16 people, depending on the availability. Even more impressive to note, these interpreters are volunteers. That’s anywhere from 500-600 people who freely donate the time and talents. And remember, there’s only one set of bathrooms.

Each booth is set up for two people to see and hear the broadcast; one is actively translating while the other is on standby for backup. In many languages, there are not locals who can either speak fluently or without a thick accent. For these languages a Tieline codec is used and the audio is sent directly to that country, using IP, ISBN and analog phone lines, where it is interpreted and sent back to the Language Control Room and then distributed around the Conference Center campus using Listen Technologies and other receivers. In all there is less than a ten second delay from the time the original content is spoken, to the time the interpreted language is received. It makes my head spin just thinking about it!
Everything produced out of the Conference Center, is in a minimum of 13 languages though the majority goes out in 32. To keep things moving quickly, the translations are all recorded and cut at the same time. This goes for audio recordings, films and productions.

The Translation Control Room has a complete wall of custom designed boxes, 48 ATM-2000

(Automatic Translation Mixers) designed by dlb Research. The ATM-2000 automatically adjusts the microphone volume of each interpreter, fades the live program up and down for the musical numbers and provides an intercom to each interpreter’s booth. From the Windows based control surface allows the operator to monitor all 96 languages, see at a glance the status of microphones and signal levels, as well as use a talkback system to speak to individual interpreters or all at once.

“Fifty years ago we were interpreting from dirt floors in the Tabernacle, and now we are interpreting for a single event from essentially anywhere in the world,” said Brad Lindsay, the Church’s manager of interpretation services. “This is a huge change, and technology makes this all possible.” Source >
It’s inspiring to see just what can be achieved as technology evolves.
0 replies

A New Day at Caesars Palace
Scroll to top