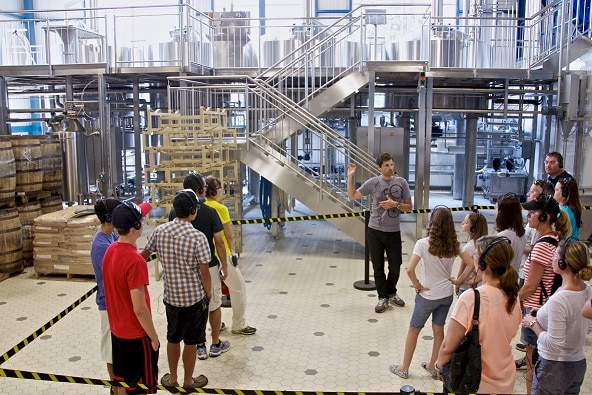 When Allagash Brewing Company decided to expand their original space it was great for business growth but left them with a particular problem in regards to their onsite visitors. Their guided tours were simply too noisy and people who went on them would often stand around and not experience it the way it was meant to be experienced since tour-goers couldn’t hear.

The ambient noise from the brewery itself, as well as a combination of sounds from the employees’ music and the bottles in the bottling room made it difficult to understand the tour. “The brewery can be a very loud place,” says Jill Sacco of Allagash. “Guests often missed much of what was being said and it was exhausting for the guides, as well.”

The solution turned out to be Listen Technologies tour group equipment. Listen’s Portable RF products allow Allagash Brewery’s visitors to understand every word their guides say. During the summer months, the brewery has as many as 1500 people per week that visit their facility. Their new Listen equipment has made obvious improvements for their guests, as well as their tour guides.

Since receiving their Listen equipment, the employees at Allagash have also built a special stand to hold their tour group system to make it easier for visitors to pick up and return their receivers. Allagash has a clear commitment to their customers, from the incredible beers they craft, to the positive experiences they create while guests visit their brewery facilities.

Located on the outskirts of Portland, Maine, the Allagash Brewing Company started as a one-man operation in 1995. Founder and beer enthusiast, Rob Tod, had noticed that while both British and German styles of beer were prevalently represented among the craft brewing movement, there was a style that was missing and he was thirsty for it. Through his travels and adventures, Tod had grown quite fond of Belgian-style beer and he felt that it was high-time that the American drinking public had a taste.