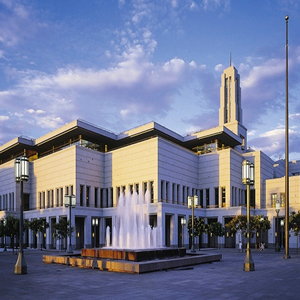 This blog is the first of a three part series.

The LDS Conference Center located in downtown Salt Lake City is the largest LIVE audio installment in the US. As part of its AV Week celebration Listen Technologies co-hosted a tour of the 1.4 million square foot facility that seats 21,000 people.

The AV Tour of the LDS Conference Center was
my first InfoComm AV Week experience. What an impressive way to be introduced into what AV Week is all about. Every October the audiovisual community comes together to celebrate, promote and share the impacts of the AV industry across the world. I joined over 35 participants from Salt Lake City for a behind-the-scenes AV tour of this extraordinary facility.

The LDS Conference Center hosts the semi-annual General Conference which is broadcast to 12 million people worldwide, “Music and The Spoken Word” (a weekly LIVE musical broadcast) as well as various cultural and artistic shows.

According to LDS Sound Engineer Trent Walker, “We get quite the gamut of performers who come through this room. In addition to LDS events there are approximately 25 other shows per year, including the National Rotary and World Barbershop conventions, concerts such as a recent performance by The Oak Ridge Boys with the Mormon Tabernacle Choir to benefit Feed the Children, and a variety of guest soloists who perform with the choir every week.”

I have been to the Conference Center several times to attend performances, but it never fails that my breath is taken as I step into the theater. It’s a one of a kind space large enough to fit a Boeing 747 but the shape of the room makes distributing audio a challenge. Most of the equipment needs to be modified. For instance, when the 350 person Tabernacle Choir is singing at full voice (and let me tell you, this is amazing to witness), it measures at about 121 dB. When using a tube mic it saturates the diaphragm so the mics are attenuated 7 dB. The result is pure, beautiful sound. Another challenge is transitioning from the full sound of the choir to a 90 year old man whose voice is a whisper. The solution is a custom built podium mic with two shotgun mics in the capsule, one on top and one on the bottom, allowing customization between presenters.

With a LIVE weekly broadcast, a Christmas concert that requires 120 inputs and productions that require the utmost care, the two common keywords that I heard throughout the tour were redundancy and consistency. Everything has a backup so that if any one element fails, it goes unnoticed by the audience. The setup in the Conference Center is identical to that in the Tabernacle, a separate building across the street where performances and practices are also held. So if mic 5 is over the harp in the Conference Center, you bet it’s mic 5 over the harp in the Tabernacle. This gives consistent sound as they move from room to room, the only difference comes when they go on tour. Isn’t it funny how these minor details may not be noticed by the end user unless they are missing?

We learned just how the sound system was designed so that no matter where you are sitting, you have not only an unobscured view of the stage but a magical experience in sound. For my #AVTweeps, here’s the rundown. The front-of-house system is set up with 18 L-Acoustics dV-DOSC cabinets flown per side and six dV-SUB ground-stacked below for extended low-frequency reinforcement. The foldback system for the choir and orchestra runs 16 discreet mixes, and monitors deployed are combination of L-ACOUSTICS MTD112b and MTD108a enclosures. There are up to 96 channels on the PM1D. Peluso P-47 cover a wide cardio A1 pattern in the soprano/alto center and tenor/bass configuration. Additionally, there are 8 hanging mics that tie to a LARES system developed by Steve Barbar an electro acoustical enhancement reverb system since the room is pretty dead on its own.
Over the terrace and balconies in the main auditorium, there are over 400 separate down firing speakers that are time aligned to the custom center cluster which uses Electro-Voice Xf, Xcn and Xb. With one speaker per channel and one DSP per channel, engineers are able to manage separate EQ, separate sound levels, test inpidual units and the sound is delayed exactly.

Not a detail is missed in assuring an unforgettable experience. Whether it’s the warm full sound coming from the choir or the crisp clear spoken word, there’s not a bad seat in the house.

Thanks to Sean McFarland and his team for giving us such an in depth tour of this magnificent facility. I certainly have a greater appreciation of the manpower and expertise that is brought together at the Conference Center. Impressive only begins to tell the story. I’ll be sharing more details from the tour including language interpretation (did you know they translate into 97 languages?) and audio, video and light mixing.