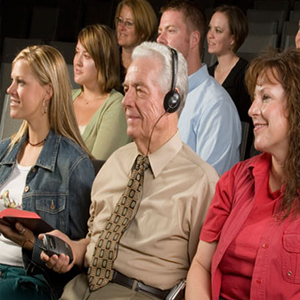 The last two issues we have looked at what houses of worship can do to help those with hearing losses and examined some of the assistive listening systems on the market. If your church has purchased such a system – what is the best way to connect it to the church sound system?

When mixing for the congregation you balance the sound from the sound system with that generated acoustically by ear to deliver the best possible blend of live and reinforced sound. Those using an assistive listening system will hear much less of the live sound in the room and most will hear the sound you send them. This means they would be best served by an independent mix created with their needs in mind, which will not be exactly the same as the normal sound system mix. Typically this is done via an AUX mix on the console.

Because they will hear very little of the live sound in the room, they may need things in their mix which are either not in the sound system mix or there at a very low level. Conversely, since those with hearing loss tend to have greater difficulty distinguishing voices from music and room sounds, they may well benefit from a mix where the voices stand out relative to the music.

Since intelligibility of words is more difficult for those with a hearing loss, you will probably not want to send any reverb or ambient microphones to the assistive listening system, since reverb while pleasing tends to reduce intelligibility.

During spoken word portions of the service, you will want to make sure that only the microphones actually being used are feeding the assistive listening system. That way the assistive system is being sent the clearest possible sound with no added background noise or sound from microphones not actively being used.

If you have the ability to filter or equalize the sound sent to the assistive listening system, you might consider filtering out sound lower than around 100 to 200 Hz. This will reduce the bass portion of the music, but also will help intelligibility. A very broad (1 to 2 octaves wide) but slight EQ boost centered at around 2 to 3 kHz of just a few dB will also help since that frequency range carries much of the speech intelligibility information. Too much boost can make the sound harsh so do not overdo this.

Assistive listening systems can be a big help to many in the congregation. The above should help you make the most of this important technology.

Ray has been an engineer in acoustics, audio systems, and telecommunications for over 30 years. He is the current chair of the AES Standards Subcommittee on Interconnections, is the author of Technologies for Worship Magazine’s bi-weekly audio newsletter and was one of the authors of the Handbook for Sound Engineers.

Ray has created some of the most advanced software-based project designs in use today, including the United States Senate Chamber, and taught the “advanced users” training seminars on the MediaMatrix configurable DSP product.

As a recording engineer for RCA, Ray recorded the Chicago Symphony, the Philadelphia Orchestra, and Frank Zappa. In 2009, Ray was made a Fellow in the Audio Engineering Society.

Communicate Clearly With Your Community
Scroll to top