You are here: Home1 > About2 > Blog3 > Assistive Listening4 > The Hult Center for Performing Arts 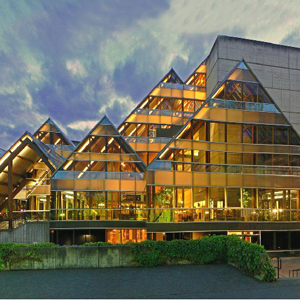 The Hult Center for the Performing Arts opened in 1982 through perseverance and initiatives by the citizens of Eugene, Oregon. Since its opening, the Hult Center has been delighting audiences and world-renowned performers alike with its stunning architectural and acoustical features.
The Hult Center has become the artistic cornerstone of the community offering a range of environments for its artists. From the towering glass lobby to the massive 2,500 seat Silva Concert Hall with its basket weave ceiling, to the intimate 500 seat Soreng Theater with its intriguing asymmetrical design, to the divine Jacobs Gallery downstairs, the Hult Center is a stunning venue for all.
The Hult Center strives to provide excellent services and support to its patrons and offers assistive listening devices to patrons at no charge. The assistive listening system had been in use for almost all of the twenty-five years the Hult Center has been open. Recently the operations team determined that the existing system was in dire need of an update if they were going to continue providing quality service for their patrons.

Denny Conn, Head Audio Engineer for the Hult Center contacted Steve Armstrong, from Pros, Inc. to assess options for their assistive listening needs. Mr. Armstrong reviewed the possibility of repairing and upgrading the existing system or installing a completely new system. Because they wanted to broadcast in stereo as well as provide a descriptive listening channel, he recommended a new Stationary IR System from Listen Technologies. “He told us that it would provide us with enhanced performance over our old system, and at a fraction of the price we would pay for another competitor,” stated Mr. Conn.
Steve Armstrong contacted Kyle Anderson, President/CEO Principal Designer of AGI to arrange for a product demonstration. AGI, a Listen dealer is noted for designing and installing complete audio, video, lighting and acoustic solutions for large and small organizations throughout the world. “We brought in key potential users of the system to hear how it sounded and test how easy it was to use. All were very impressed with the quality of the Listen system,” said Mr. Conn.
0 replies