You are here: Home1 > About2 > Blog3 > Corporate4 > Factors that Impact Sound Quality 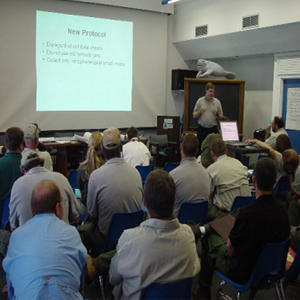 It would be nice if all a presenter had to do was speak louder to ensure everyone could hear. But it’s rare to find a powerful voice that carries all the way to the back of the room.

If they did, it would likely be too loud for the people in the front of the room. But volume is just part of the battle.

Sound quality is affected by a number of conditions, chief among them:
• Distance—between the listener and the person speaking
• Room noise—such as HVAC systems, paper shuffling, and people whispering
These factors make it difficult for people to hear regardless of how loud the presenter tries to talk.
Distance
In physics, the inverse square law tells us that sound decreases by 6 decibels (dB) every time the distance from the person speaking to the person listening doubles.
The typical presenter’s voice measures 60dB at a distance of 4 feet from the listener. Double that distance to 8 feet and the volume drops to 54dB. At 16 feet, the volume is 48dB.
The effect of distance on sound is the reason we huddle around speakerphones and try to move closer to the person speaking. But in a large group meeting, that’s clearly not a practical solution.
Room Noise
In addition to distance, we also have to contend with noise. All rooms have noise. This noise is created by a number of things: projector or computer fans, building systems (HVAC, plumbing), people whispering or shuffling papers, external noise (traffic, construction), etc.
The combination of these noises is called ambient or background noise. Loudness is measured in decibels.
For a person to be heard clearly, the level or loudness of their voice needs to be significantly above the room noise. An acceptable separation of speech to background noise is about 15dB. For example, let’s say the ambient noise level in the meeting room depicted in the figure above is 45dB. The presenter is speaking at 60dB so her voice is 15dB louder than the room noise and can be easily heard and understood.
However, the room has noisy fans that just turned on so now the ambient noise is 50dB. Now with only 10Bb of separation from the background noise to the speaker, intelligibility starts to suffer.
At this level, while the people in the front, near the speaker, may be able to hear, it would be very difficult for the people sitting 16 feet from the presenter in the previous example to hear, because being farther away from the speaker’s voice, the speech would start to blend in with the background noise.
This is similar to when you’re sitting in a crowded restaurant and you can hear the person next to you, but have a hard time hearing people across a larger table.
Room noise can be minimized by installing sound-absorbing materials such as ceiling tiles and wall panels. However, that can be a costly endeavor. In many multipurpose rooms, the easiest way to overcome the effects of distance and room noise is through mild or slight sound amplification.
2 replies

Giving Thanks Beyond Thanksgiving
Scroll to top