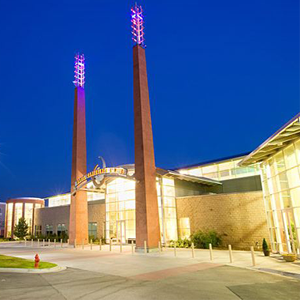 Located 19 miles north of Salt Lake City in Layton, Utah, the Davis Conference Center offers over 32,000 square feet of meeting space incorporating ballrooms, break-out meeting rooms, and two exhibit halls. The Center is a high-tech facility, providing users such amenities as wireless internet, Sirius/XM Satellite Radio, bright LCD projectors, “continuous break” dining and food stations, and even two weather towers that indicate the coming day’s weather through LED flood lighting.
The facility’s AV design also incorporates advanced technologies thanks to system designer David Drommond of Sound Design International. Automatic A/V switch­ing systems are used to route audio and video to the meeting rooms and exhibit halls, and infrared assistive listening systems from Listen Technologies are part of the package.
Drommond was an early adopter of Listen IR products. “I’ve known Russ Gentner (Listen Technologies CEO/President) a long time,” says Drommond. “When Listen began the design of their IR system, I was quite interested and Russ sought my input on what should be included in the system. I had been using other manufacturers’ products for a while, but those designs hadn’t been updated in years and were pretty costly. I liked what I saw in the Listen IR products and wanted to give them a try, so I specified them for this facility.”
System integrator Poll Sound installed eight Listen LT-82 Stationary IR Transmitters in a central equipment room, and placed LA-140 Stationary IR Radiator units in each of six meeting rooms.

LA-140 units were also placed in each of the two exhibit halls at the facility. “We used the white radiators for the meeting rooms because they blend in nicely with the walls,” says Drommond. “The black versions went into the exhibit halls’ rafters, which are also black, so they virtually disappear.” LR-44 IR Lanyard 4-Channel Receivers are available for use in each of the rooms.
The Davis Conference Center is set up with movable walls that can create many different configurations for meeting spaces, including the capability to open up the entire space. Drommond designed an infrared switching system for the center that senses when a wall has been moved and automatically combines the audio, video, and Listen IR systems for the new space.
“The advantage of IR is that it doesn’t penetrate the walls, so when rooms are set up individually the people using the Listen system are only getting the audio for the room where they are located,” Drommond says. “But, as soon as the wall moves, the Listen units in both rooms will automatically switch to the same audio source and will both transmit the same information. As far as I know, this is the first system of its kind that has been done this way so the hearing assistance systems can combine and divide along with the rest of the system. It makes it really slick for the people who work here because they don’t have to think! They move a wall and the system automatically resets itself to the new configuration.”

“We use the Listen systems for both hearing assistance and language interpretation,” says Jay Clark, AV Manager for the Davis Conference Center. “The center is perfect for groups of different sizes and interests who can all be here at the same time and each have their own AV sources running. The Listen system works really well for us because we have lots of diverse groups including senior citizens who need assistive listening as well as groups who need an interpretation system. We can have an interpreter anywhere, providing language interpretation services for a meeting, and the interpretation can be heard in multiple rooms. Assistive listening can be provided for single or multiple rooms, and everything can be combined. It’s really versatile and very useful.”
0 replies